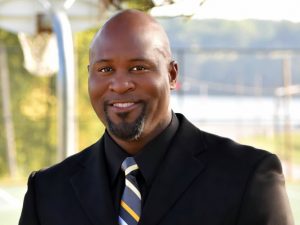 Rodney “Sky” Walker has always been part of a team. Whether on the childhood courts of Decatur parks or in an arena of thousands, Walker knows that success is collaborative. A basketball standout from an early age, he is well-versed in the fundamentals of leadership and teamwork. Motivated to take on his next leadership role, Rodney Walker has announced his candidacy for Decatur City Council.

Son to Betty and Edward Walker, he is a graduate of St. Teresa High School, where he was recognized as Macon County Player Of The Year and Senior Male Athlete of the Year. In just two seasons, Walker scored over 1,300 points with an average of 31 points per game, leading all of Macon County in scoring. Walker next attended Glen Oak Community College in Centreville, Michigan, where he received his Associate’s Degree in Business and was named Junior College All-American. He then chose the nationally ranked New Mexico State Aggies to continue his career as a student athlete. It was there he met cheerleading coach and future wife, Karen, who now has been teaching in the Decatur Public Schools for over fifteen years. Together they have two beautiful and talented children: Rodney “R.J.” and Sydney “Sky”.

After a successful career overseas, Walker returned to his hometown of Decatur, graduated Magna Cum Laude from Millikin University with a Bachelor of Science Degree in Organizational Leadership, and enjoyed a career in wealth management with Northwestern Mutual Financial. His profession allowed him to form lasting relationships with local business owners, families, and individuals. He also began what would soon become his calling: fostering and developing the youth of Decatur. In 2007, Walker and close friend, Eisenhower alum Joey Flies, opened the doors to Skywalker International Sports Complex located at the old Decatur Armory. In addition to basketball leagues and individual training, this multi-purpose facility houses boxing matches, boot camps, concerts, and numerous events.

Walker also opened the SkyBox Sports Connection Bar and Grill, an industry he credits with his knowledge of city food, liquor, and tax laws.

A decade later, Rodney Walker has found the right balance necessary to run and operate SkyWalker Sports, manage a career in pharmaceutical distribution, coach his fifth season for Eisenhower High School boys basketball team, and most importantly, remain a dedicated father and husband.

Walker still prioritizes the growth and development of Decatur’s youth through his involvement in fundamental basketball league, Southside Sundays at Mueller Park, Junior High Boys/Girls All-Star games, Summer travel AAU, and Southside Improvement Association. Walker is also a member of the Southside Support 217, John C. Ellis Lodge No.17, and GT Church. In 2012, he was recognized in Herald and Review’s Top 20 Under 40, and was named the 2017 Macon County Boys Basketball Coach of the Year.